What God Can Do With One Man

A friend sent me the following in an email; When James Buchanan was President of the United States, there was a sudden downturn in the economy. Like our current recession, the Panic of 1857 hit almost every industry. Banks and businesses failed. The stock market plunged 66% from 1852-1857. Thousands of people were out of work. The economic meltdown spread to Europe, South America and the Far East. In New York alone, 30,000 out-of-work people protested and caused civil unrest. A quiet, zealous forty-six-year-old businessman named Jeremiah Lanphier saw the spiritual needs of those days. He started a noon-time weekly prayer meeting in New York City. Lanphier printed some flyers that invited people to a prayer meeting with the title, "How Often Should I Pray?" He left these leaflets in some offices and warehouses. The agenda was simple: Pray for a few minutes or for the entire hour. Prayers were to be brief. Lanphier's group met on the third floor of the old North Dutch Reformed Church on Fulton Street in New York. The first day, September 23, 1857, Lanphier prayed by himself for half an hour. But by the end of the hour, six men joined him. The next Wednesday there were twenty. On October 7 there were nearly forty. The prayer meeting grew so much that they decided to meet daily. The next week over one hundred came. Many of them were not even believers. They came because the Holy Spirit had spoken to them about their sin. Soon pastors who had attended the noon prayer meetings on Fulton Street started morning prayer meetings in their own churches. Soon these prayer meetings were overcrowded too. Men and women, young and old were praying too. The presence of God was felt in these prayer meetings. Then, the newspapers began to report on these prayer meetings. In just a few months, there were prayer meetings across America. Philadelphia, Boston, Baltimore, Washington, D.C., Richmond, Charleston, Savannah, Mobile, New Orleans, Vicksburg, Memphis, St. Louis, Pittsburgh, Cincinnati, Chicago, and most of the large cities had prayer meetings. In rural places, the revival spread too. Thousands and thousands of people across the United States were praying at these services and at home too. Spiritual revival spread like wild-fire across the nation. The revival went to the high seas too. As one ship neared port, the captain signaled the harbormaster "Send a minister" because revival had broken out on board. On the ship, people began to sense their own need for God, and began to pray. When another small commercial vessel arrived in the harbor, the captain, and every member of the crew had pledged faith in Christ within the last 150 miles of their voyage. Ship after ship arrived in the US with the same story, telling of passengers and crew who were convicted of sin and turned to Christ. History records that the U.S.S. North Carolina, a navy battleship, was anchored in New York. There were four Christians who agreed to meet together for prayer. They knelt on the lower deck. They were so filled with joy that they broke into song. Some unbelieving sailors on the top deck heard the singing, looked down, and saw the boys kneeling. These men ran down to the lower deck to make fun of them. But the conviction of the Holy Spirit so overcame them that by the time they reached the bottom deck they fell on their knees in repentance. The revival spread through the Union and Confederate armies. One historian claims that the Civil War may have been shortened because of the revival. This time in American history is called the Second Great Awakening. God moved because people were open to the leading of God. It is estimated that 6.6 percent of the total population of the United States came to faith during this time. Think of it, all this happened in an economic downturn, while war and social upheaval was going on. And one lone man, Jeremiah Lanphier, was one of God's tools to bring about this great revival. We live in similar times to the ones in which Jeremiah Lanphier lived. In times of economic, social, and spiritual upheaval, God often works the best. But God has no hands but our hands. God needs people like you and me to bring about the renewal and revival.Will you be just like Jeremiah Lanphier? Will you be open to God's voice in your life? Will you be God's person for our nation and our world? Will you be open to be used of God to change the world?
Posted by Pastor David Cuff at 1:25 PM 1 comment: Links to this post 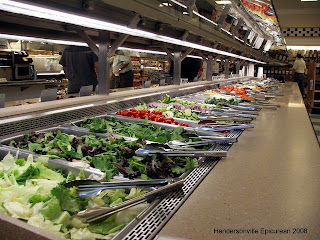 Have you ever been down the cereal isle at any grocery store? Unless you know what you are looking for you very well might find yourself captured by the color of the boxes instead of the ingredients inside...I am so glad that my ministry is not the only one that God has given to the San Fernando Valley. I am so glad that my style of ministry is not the only one that is available to God's people. Variety is a wonderful thing, and within the Church of Jesus Christ God has put together so many different people who all love and follow His Son. But one of the problems the Church has experienced is what someone once called "Salad Bar Christianity." That is, going from local Church to local Church, and never becoming part of a fellowship of believers. Never investing your life into a "home" fellowship and never giving others a chance to invest into your life. Let's face it, The Kingdom of God is all about relationships. First a relationship with Jesus Christ, then with each other in the Body of Christ, and finally with our outreach through relationships into the World. In God's Word three main metaphors are used to illustrate the Church of Jesus Christ;

In each of these metaphors there is a clear picture of long-term relationships. A building, a body, and a bride are never to be temporary or transient. Even the Human Body, while temporary in this world will be the seed by which our new Resurrected bodies will be formed. So, why would anyone who is part of Jesus' Church not "plug in" and develop long-term relationship. Why would anyone who is a follower of Jesus Christ not invest his or her life into others who are following Jesus as well.... Well, just a little something to challenge our Salad Bar attitudes.....

Posted by Pastor David Cuff at 4:36 PM No comments: Links to this post